This story starts off with a simple beginning, a group of friends (aka the North Iowa Bloggers) were getting together for an evening of fellowship and taste testing (something we've been known to do).  This particular evening's gathering center around the Lay's "Do Us a Flavor" Chips campaign so everyone talked about all of these cute little salads and fruit trays they were going to bring to compliment the potato chip taste test.  I thought to myself, if I am going to participate in a chip taste test I'm going to need something more than roughage, I was going to need some MEAT!  So I brought what any good ol' Iowa homecook would bring to a potluck - Ham Balls.  Little did I know I'd be bringing something very special for my friend Jeni from Jeni Eats, I'd be bringing her, her very first ham ball - a culinary classic unknown to her before that beautiful summer evening and what now has led to, dare I say, an obsession since then.

So fast forward over the last few months and Jeni still can't get my ham balls out of her culinary palette.  She has tried making her own version, has checked her collection of church cookbooks for recipes, and has tried her local butcher's version and a local grocery store's version, but still can't forget her first true Iowa ham ball.  So Jeni asked if she could come over to my house to see a "real Iowan" makes Iowa ham balls.  I of course said "Sure! Come on over!" and began to frantic.  See the thing is, I didn't know what recipe I used on that beautiful August night - the only thing I did remember was that I pulled them out of the freezer, threw them in a crock pot and put what was left of a bottle of bbq sauce from the refrigerator on them...  The only thing left to do, was to start from the basics, and make my own Iowa Ham Ball recipe to share with her and you! 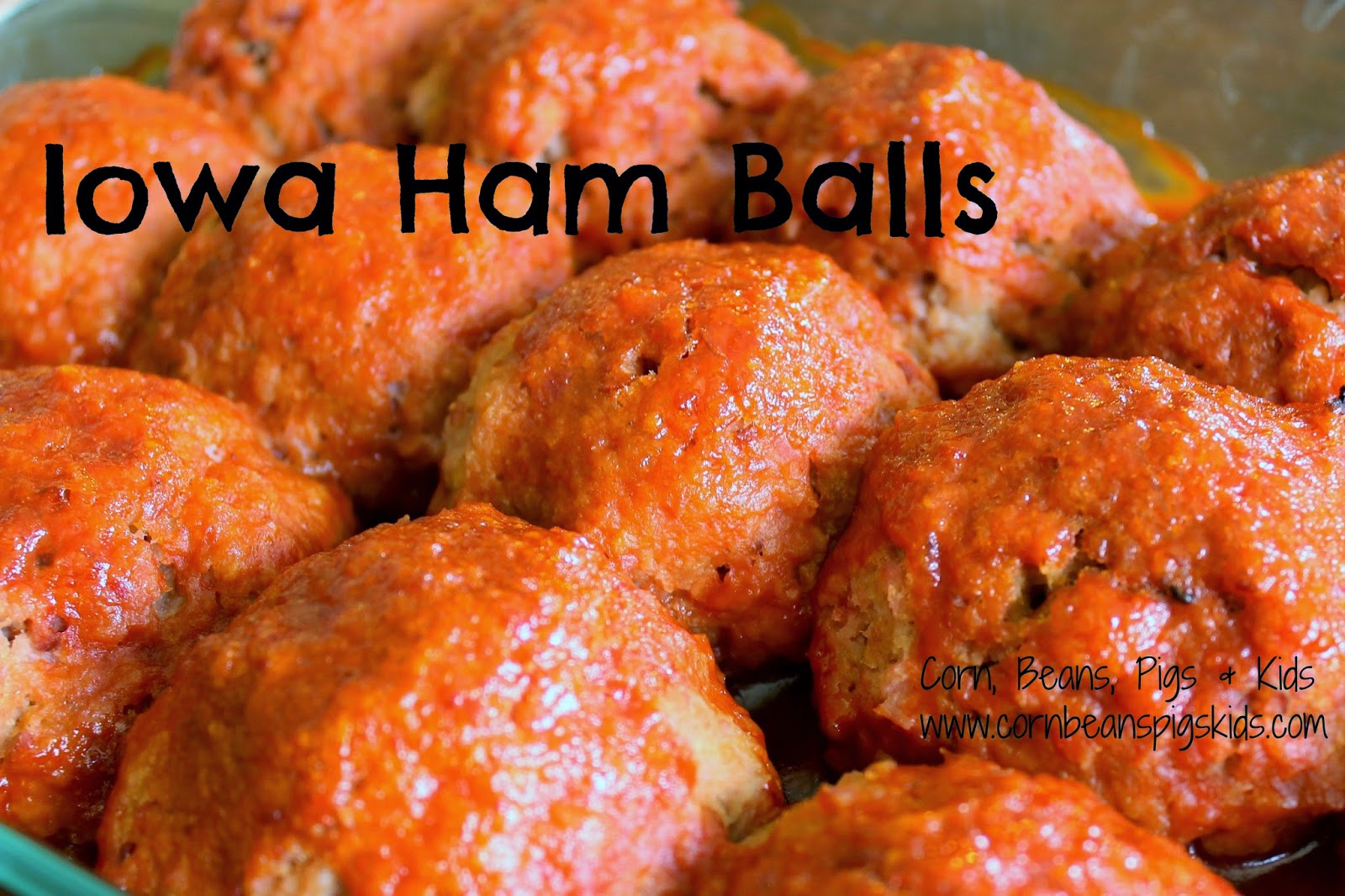 With a food processor, grind your ham loaf into small chopped pieces (or buy ham loaf mix from local grocery store or butcher - this mix usually contains ham and ground pork, and sometimes ground beef too).  Add the eggs, graham cracker crumbs and milk.  Mix together with your hands and form fist-sized ham balls.  (If the mixture seems a little dry, you can add 1/4 cup of milk at a time, up to 1 1/2 cups of milk total.)  Place ham balls in a 9"x13" pan.  They fit nicely three across and five down.

Then mix the soup, brown sugar, vinegar and mustard til smooth.  Drizzle the glaze over the ham balls for the classic ham ball sauce.  (Or, if you're in a rush like I was this past summer - drizzle your favorite bbq sauce over them!)

To check out a video of these Iowa Ham Balls being made, check out Jeni Eats!

These ham balls freeze well and can be warmed up in a crock pot if desired.  Ham balls are the perfect Iowa potluck treat!  Our family loves pairing Ham Balls with Cheesy Hashbrown Casserole!

Have you ever heard of ham balls?  How do you make yours?  When you think of classic foods for your homestate what comes to mind?  Remember to Comment for a Cause!
Posted by Val at 3:55 PM