Carrie Chapman Catt was always defying the odds.  From graduating high school and then college, to becoming a school superintendent, to becoming a leader in the women's suffrage movement and founding the League of Women Voters.  She was always pushing the envelope, and it all started growing up on a farm outside of Charles City, Iowa. 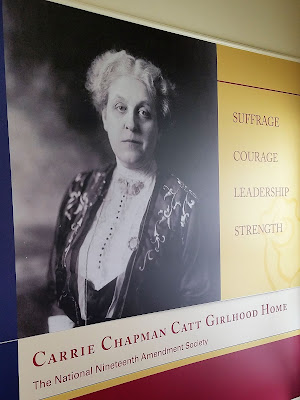 Today is International Women's Day and I thought what better woman to share about, than Carrie Chapman Catt.  I had the privilege of touring her Girlhood Home outside of Charles City, Iowa in December and I've been impressed with her and the museum ever since.

Carrie and her family moved to Iowa when she was seven years old and spent her youth and early career making big impressions in the state.  One story our tour group was told about, that shaped the path Carrie took, happened when she was 13 and she questioned why only her father and his hired man got to go into town to vote and her mother didn't.  She was told that voting was too important of a civic duty to leave to women.

As an Iowa State University graduate, I became aware of her as I walked by the building on campus named after her.  Carrie graduated from Iowa State Agricultural College, now Iowa State University, in 1880.  She was the valedictorian and only female in her graduating class.  During her time at college she started speaking up for women and today that is honored through the Carrie Chapman Catt Hall that focuses on Women's Studies and Political Science. 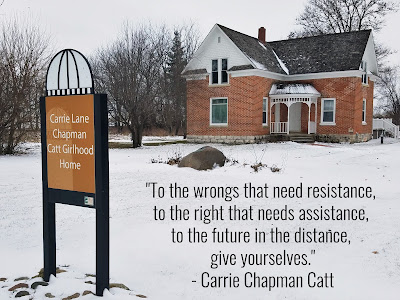 Following college, Carrie made waves by becoming the first women superintendent for the Mason City, Iowa school district.  She then married newspaper editor Leo Chapman and continued her leadership for women's equality in California.  Chapman died shortly after and a few years later she married George Catt.  While being married to Catt is when Carrie took her involvement in the women's suffrage movement into overdrive.  She spent many days campaigning across the country for women's rights.

Following the passage of the Nineteenth Amendment, Carrie worked closely with governors across the country to secure ratification of the amendment in their states.  She also founded the League of Women Voters.  When the Nineteenth Amendment passed there were 27 million women who had little experience in politics or expressing their opinions by voting.  To help these women learn about their new responsibility, the League educated women about voting issues, the political process and empower them to stand up for social and economic reform. 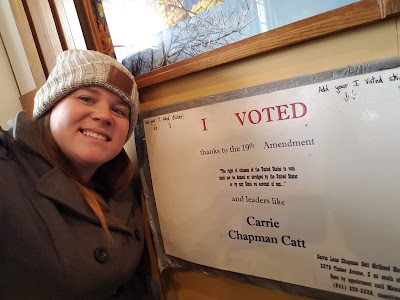 Thanks to leaders like Carrie Chapman Catt I am able to vote today.  And thanks to leaders in the Charles City, Iowa area and the National 19th Amendment Society, people are able to learn about Carrie's story and not forget the path it took for women's right to vote. 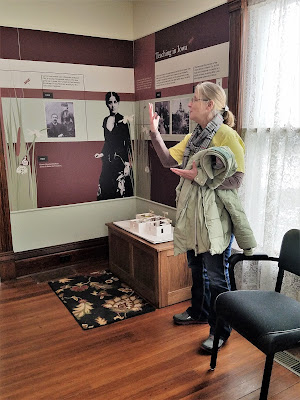 Carrie Chapman Catt's Girlhood Home, located in rural Charles City, Iowa, is open to visitors late May to early September, seven days a week.  Admission is free and volunteers staff the home.  The home is also open by appointment and that is how I got to visit in December.  The 19th Amendment Society President, Cheryl Erb, gave a tour of the home to our group.  Unlike other birth or childhood homes you may have visited in the past that are set up with time era furnishings, Carrie's home is set up with display panels that walk you through the timeline of Carrie's life, along with local, national and world events.  It was neat to see what she was working on and what major events were happening at the same time.  Be sure to follow the Carrie Chapman Catt's Girlhood Home on Facebook, to stay informed on annual events throughout the year, and as they celebrate the 100th Anniversary of the ratification of the 19th Amendment with some special events.

Who are some women that have made a difference in your life? 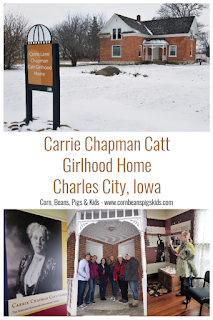