When I was in college I had the privilege to intern for one of Iowa's senators in Washington D.C.  My main role was working with the legislative team, but I also helped give Capitol tours when large groups came through the Senator's office.  There are many interesting facts about the US Capitol; one of which is that placed within the Capitol are two statues representing each state.  Each statue is donated by individual states to honor persons notable in their history.  It was always apart of the tour to show both of Iowa's statues in the National Statuary Hall Collection to visitors - Samuel Kirkwood and James Harlan.  Now I have to admit, I really didn't know too much about either Iowa figure before my summer of giving tours.  Both names were familiar, but I wasn't able to tell visitors too much about them until after some research.  Samuel Kirkwood was the governor of Iowa and also a U.S. Senator; his statue was given to the collection in 1913.  James Harlan served in the US Senate and also as US Secretary of the Interior; his statue was given to the collection in 1910.  I tell you all of this why?  Because...

I've very proud to say that today, after a few years of work and dedication, Iowa will replace the statue of James Harlan with one of Dr. Norman Borlaug.  Since 2003 when the law changed to allow states to remove a previously placed statue from the collection and replace it with another, only four other states have replaced statues.  Today Iowa becomes the fifth and I can't think of a better representative and historical Iowa figure other than Norman Borlaug.  And the really cool part, it's happening on Borlaug's would be 100th birthday and National Ag Day. 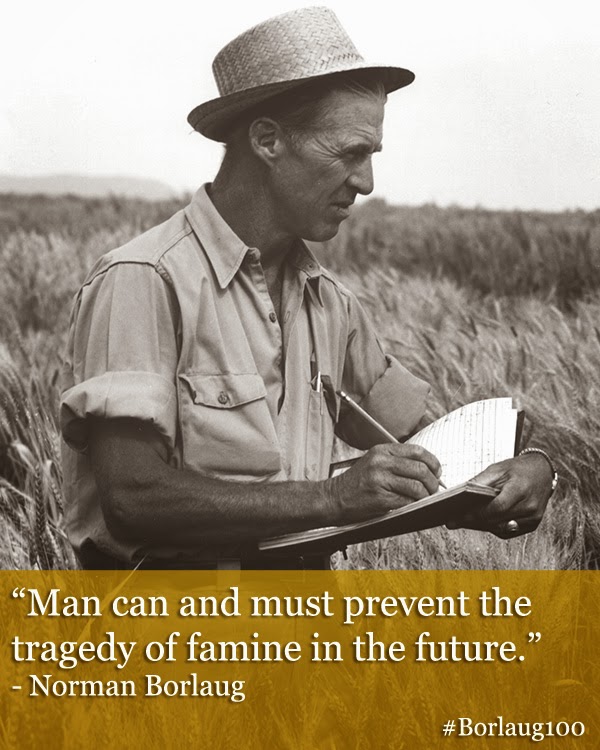 Norman Borlaug was an innovator, farmer, humanitarian and Iowan.  Born on a farm south of Cresco, Iowa, he is considered the "Father of the Green Revolution" and is estimated to have saved 1 billion lives through his agricultural innovation advances in wheat breeding preventing a mass famine.  He is also known for founding the World Food Prize, which is also known as the "Nobel Prize for Food and Agriculture".  The World Food Prize inspires and recognizes achievements in improving the quality, quantity and availability of food in the world.  Norman Borlaug is also one of only three Americans to have received the Nobel Peace Prize, the Presidential Medal of Freedom and the Congressional Gold Medal (others are Martin Luther King, Jr. and Elie Wiesel).  He also received the National Medal of Science. 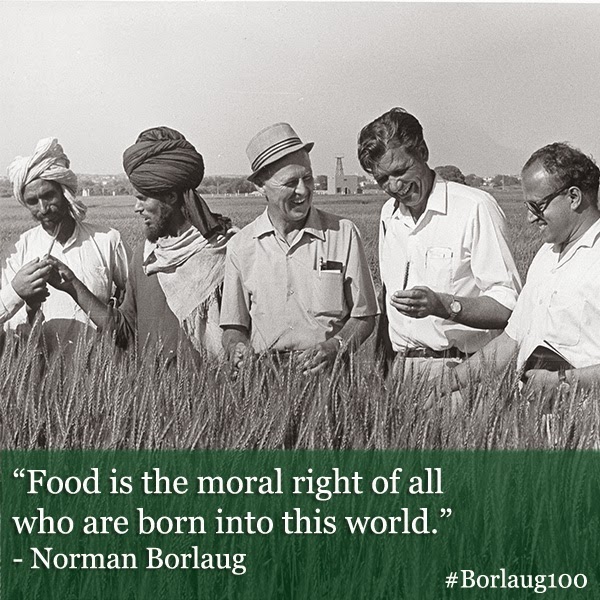 After graduating from Cresco High School, he went to the University of Minnesota to study agronomy and plant pathology.  He then went on to dedicating nearly 60 years to ending world hunger by working on agricultural productivity in developing countries, most notably Mexico, India and Pakistan, and later other Asian and African countries.  He developed types of high-yield, disease-resistant wheat varieties to help alleviate hunger.  He also worked on improving crop management practices in these countries so they could produce more wheat, one of mankind's food staples.

Norman Borlaug helped pave the wave for agriculture innovation to help feed a growing population, a goal that today's farmers and agricultural scientists are still aiming for.  Just think how the world would be now without his contributions?  Food security is still an issue around the world, but if Norman Borlaug hadn't taken the initial step to help provide food for countries that had no other means or resources to get it, think what situation we'd be in then?  On our farm we are using new technologies to help us be more efficient on our land: corn that is resistant to insects, soybeans that are resistant fungus, precision planting and GPS, etc.  The work and improvements of today continue to build upon the foundation that Norman Borlaug set back in the 1940's.

I am a proud Iowan and farmer today to have Norman Borlaug recognized for all of his agricultural and humanitarian efforts.  If you would like to learn more about Norman Borlaug be sure to check out #Borlaug100 and you can watch a live webcast of the statue being unveiled at 10 am CST.

What do Norman Borlaug's contributions mean to you?

Remember to Comment for a Cause!
Posted by Val at 6:00 AM