* I received complimentary admission to facilitate my review.
All views and opinions shared are my own. *

Agri-tourism is a growing area of interest in Iowa - from going to the National Toy Tractor Museum in Dyersville, to touring the World Food Prize in Des Moines, to visiting Blue Bunny in Le Mars, there are many options on how to get a look at the wide world of agriculture.  One fun trip that the kids and I were able to take last week before school started, was a tour of Tyden Farm No. 6 near Dougherty, Iowa (which is about 30 miles away from our home).  We had a great time touring this 10 acre homestead, owned and operated by Ted and Judy Pitzenberger, with the North Iowa Bloggers. 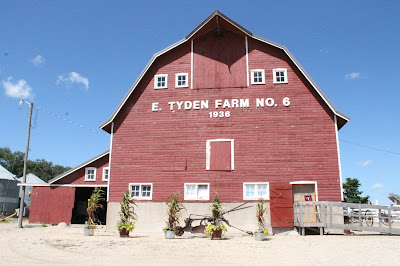 What is Tyden Farm No. 6?  Tyden Farm No. 6 is a historic farm that was placed on the National Register of Historic Places in 2009.  The Tyden Farms (there were eight total) were started by Emil Tyden in the 1930's.  The farms were a source of jobs and were always on the cusp of new technologies in the Dougherty and Greene, Iowa area.  In 1994 the Emil Tyden family started selling the farms.  Tyden Farm No. 6 was bought by Ted and Judy Pitzenberger.  Shortly after buying the farm, they looked into the history of Emil Tyden and Tyden Farms more, and decided to start restore the farm back to it's original glory.  They enjoyed preserving the farm so much that they now open it up to visitors by reservations.

Who is Emil Tyden?  Emil Tyden was a Swedish immigrant who arrived in America in 1882 as a teenager with only $20 in his pocket.  He worked various jobs across the United States, including working for the railroad and serving in the Army as a "$1 a year man".  While working for the railroad he invented, the Cargo Seal, which kept (and still keeps) train cargo safe and secure.  At the same time he went on to creating one of the world's first automation systems to help supply the mass amount of Cargo Seals needed in Hastings, Michigan - a decade before Henry Ford started mass producing automobiles.

In 1920, a fire destroyed his Cargo Seal factory so Tyden resolved this issue by entering the fire sprinkler business.  He started manufacturing fire sprinklers and valves, and today, you can still see his product in office buildings across the world.  Tyden had over 200 patents, and while he loved inventing and made his wealth in manufacturing, he had a love for agriculture and farming.

So with his profits, he invested in farm ground in the Dougherty and Greene, Iowa area during the Great Depression.  His farms were well respected in the area.  They employed many people during a time of high unemployment, and they were always on the cutting edge of technology.  His farms were some of the first in the area to have cement and electricity.

Why should I look into Agri-Tourism for my next trip?  Agri-Tourism is a great way to help better understand and appreciate the land and the people who live and work on it.  Many aspects of the agricultural landscape have changed over the years, so it a great way to learn about the science that goes into farming - something that Emil Tyden was very proud of.  Agri-Tourism is also simply a lot of fun where you can get a personal look and experience into agriculture.

Touring Tyden Farm No. 6 was a lot of fun for us to see what farming was like decades ago.  It was also great to see the pride that the Pitzenberger's take in Tyden's story and their own farming heritage.  They not only have several farm implements and buildings that were used on the Tyden Farms over the years, but they also have a museum with several of their family's memorabilia and history.  You can tell how much farming is a family business and how agriculture really built and supported communities in the area.

You can learn more about Tyden Farm No. 6 by visiting their website, or by scheduling your own tour by contacting Ted and Judy Pitzenberger at 641-426-5277 or tyden6@netins.net.

Have you ever visited any Agri-Tourism destination before?  If so, where?  What did you like about the Agri-Tourism experience?  Remember to Comment for a Cause!
Posted by Val at 4:42 PM