One of our family's favorite ways to explore the state of Iowa is by visiting the different county Iowa Freedom Rocks. All 99 counties in the state have a uniquely painted mural, showcasing local heroes and stories honoring area veterans painted by Iowa artist Ray "Bubba" Sorensen II. Here is a look at all of the county Freedom Rocks located in Central Iowa. 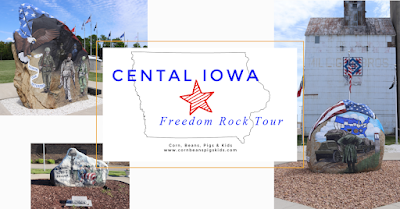 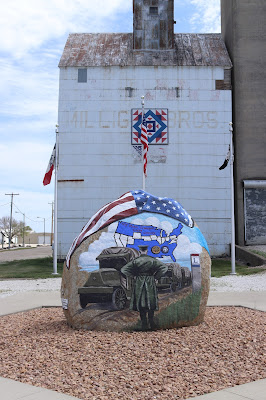 Located right on Lincoln Highway and next to the Racoon River Valley Trail, the Greene County Freedom Rock in Jefferson, Iowa is easy to find and is worth a stop when driving or biking through the area. On the front side of the rock facing Lincoln Highway is a tribute to Dwight D. Eisenhower who came through Jefferson as part of the 1919 Motor Transport Corps convoy. As a result of the many delays on this convoy and President Eisenhower's experience in seeing the Autobahn in Germany, he helped create our Interstate Highway System.

Local heroes also included on the rock are Loren Shriver, a former NASA astronaut & retired US Air Force Colonel and Tech Sergeant Bob Carmen who was a POW in Rome WWII. An interesting note about Tech Sgt Carmen's time as a prisoner was that he was able to sneak a note to the Pope who was inspecting the POWs. He asked him to write his mom telling her he was alive and the Pope did just that! He survived 27 months as a POW. 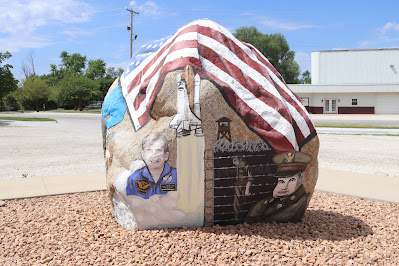 When visiting the Greene County Freedom Rock, our family recommends stopping at Twiins Shoppe in town for some delicious ice cream! 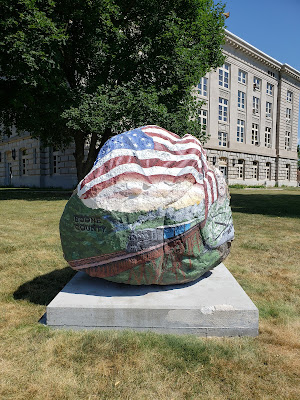 Located next to the Boone County Courthouse, this Freedom Rock pays tribute to the large National Guard base and presence in the community by featuring two local soldiers who served and died while fighting for our country, famous native Mamie Eisenhower and her husband President Dwight Eisenhower, and the importance of the railroad in Boone.

The next time you are exploring at the Ledges State Park or taking a train ride on the Boone & Scenic Valley Railroad, make sure to make an extra stop to check out the Boone County Freedom Rock! 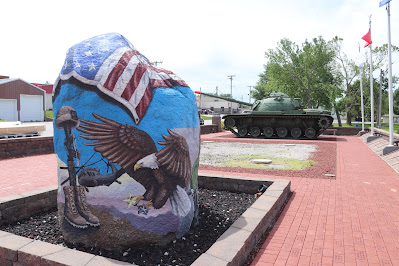 Located in the northeast corner of the Maxwell City Park and part of the Maxwell Veterans Memorial, the Story County Freedom Rock is a beautiful tribute to those who have served. On the side seen above is a tribute to Story County native Sergeant First Class Matthew Loren Rierson. His service in Somalia in 1993 was made famous by the book/movie "Blackhawk Down." He led efforts as part of the Army Rangers rescuing fallen soldiers and recovering bodies. He survived the two-day Battle of Mogadishu and then was killed by a mortar shell a couple days later. 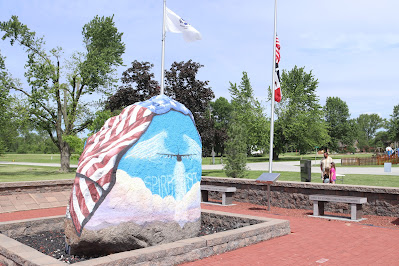 The mural of the "Spirit 03" honors Maxwell native, Staff Sgt. Tim Harrison who was aboard the gunship during a battle in the first Gulf War. The aircraft was shot down and crashed in the Persian Gulf, losing all 14 of its members as it was trying to help some Marines that needed an enemy missile battery destroyed. I appreciated the added detail of the clouds that look like angel wings. 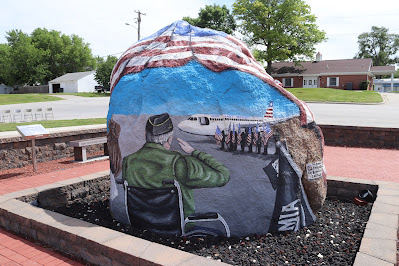 Our family also loved the side of the rock that honored those that have went on Honor/Freedom Flights. What a great program for our Veterans so they can go see their monuments in Washington D.C. 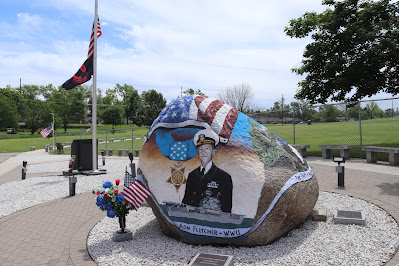 The Marshall County Freedom Rock is located next to the American Legion Golf Course in Marshalltown and honors Veterans from each war era, starting with WWI:

1Sgt. Frank Glick of Marshalltown served in the Marines during WWI and died in action as his company battled Germany. Admiral Frank Fletcher of Marshalltown seen above was in the Navy during WWII. He earned the Medal of Honor during the Battle of Veracruz. Private Harry Phipps is rumored to have lied so he could join the Army at the age of 16 and was killed in action in Korea. LCPL Darwin Judge was killed in action in the Vietnam War during the Fall of Saigon. SFC Scott Nisely was in the Army National guard and died from injuries sustained when his vehicle received fire during a security operation in Iraq. Before his service in Iraq, Nisely was an active duty Marine and then reservist who served in other places, including Dessert Storm. The Marshalltown Post Office, where he worked while serving in the National Guard, is now named after him. 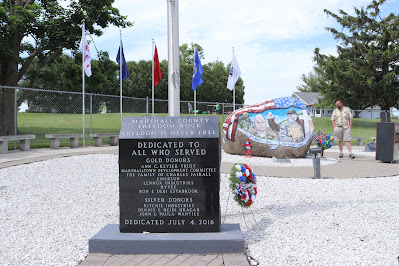 We were fortunate to visit the Marshall County Freedom Rock on Memorial Day and had an opportunity to walk down to the Memorial path to the Vietnam-era jet that is on display. An area Veteran is one of the men who flew the plane in action. 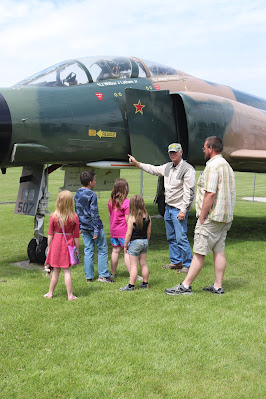 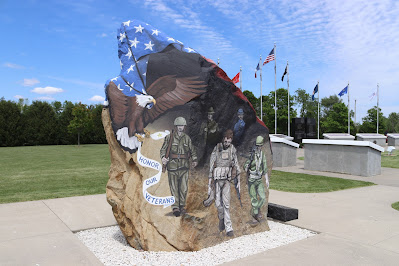 The Tama County Freedom Rock is located in the All Veterans Memorial along Highway 96. The front side of the rock, shown above, shows a procession of soldiers from the Civil War to present day. 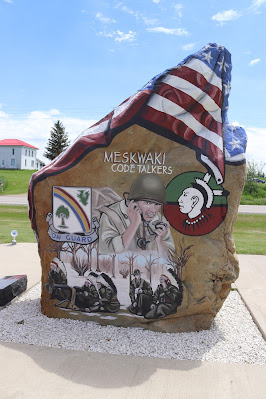 The other side of the Freedom Rock pays tribute to the Meskwaki Code Talkers of WWII. Meskwaki men and other tribes were trained in their native languages to provide secure battlefield communication during WWII. In 2013 the Code Talkers were posthumously awarded the Congressional Gold Medal for their sacrifices. Much of their contributions and codes remained classified until 1968. 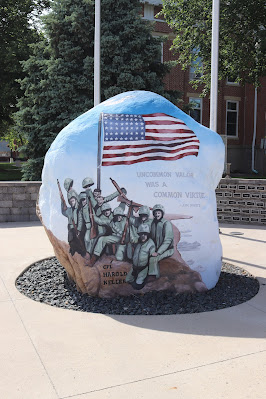 The Poweshiek County Freedom Rock is located next to the Poweshiek County Courthouse and shares the story of a few area veterans. Corporal Harold Keller of Brooklyn, shown above, witnessed both flag raisings on Mt. Suribachi and the mural depicts the "Gung Ho" picture taken after the second flag raising that features Keller. 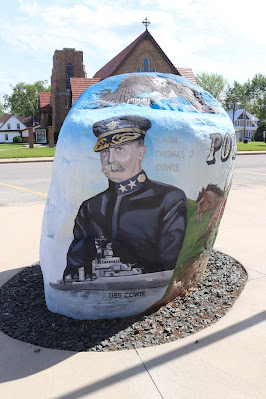 Rear Admiral Thomas Cowie was from Montezuma and was awarded the Navy Cross for his services in connection with the Liberty Loans of WWI. He was also honored by having a destroyer USS Cowie named after him. 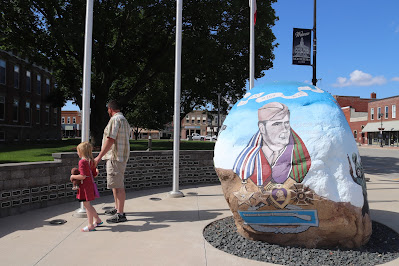 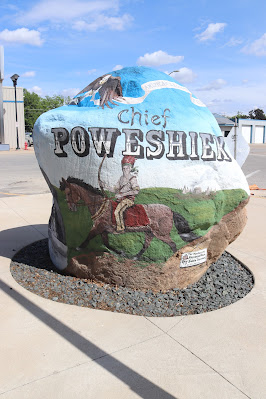 The final side of the Freedom Rock shows Meskwaki leader Poweshiek, who the county is named after. Poweshiek was a "peaceful Indian" who possessed a "passion for justice". 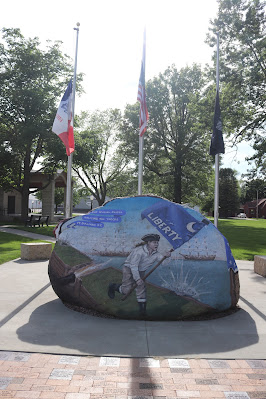 On the front side of the Jasper County Freedom Rock, Revolutionary War hero, Sgt. William Jasper is featured. While under attack by the British, the Liberty flag that Sgt. Jasper and his regiment were fighting under was shot down, and fell to the bottom of the ditch outside of their fort. Leaping from an opening, Jasper recovered the flag and supported it under intense enemy fire until a permanent flag staff was produced and installed. This rallying point inspired the Colonists to hold out until sunset, forcing the British to retreat. 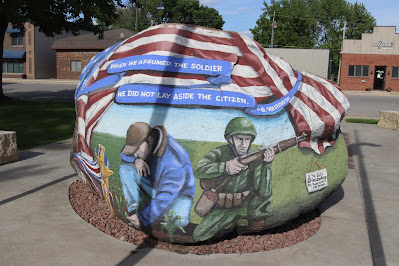 I loved the imagery on the backside of the Freedom Rock that features a farmer and a soldier crouched, representing the citizen soldier. Above the men is a quote from President Washington: "When we assumed the soldier, we did not lay aside the citizen." 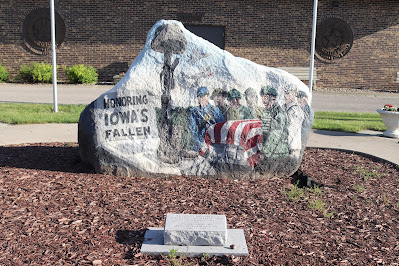 Located in front of the American Legion, the Polk County Freedom Rock's front side honors Iowa's fallen military men and women. The mural of members of our military from the Civil War through Iraq/Afghanistan carrying the casket of a recently fallen soldier is a powerful image. 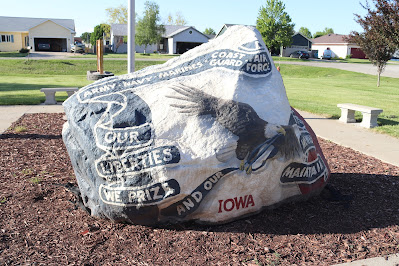 The backside of the Freedom Rock show a slight modification to the Iowa flag and includes all five branches of the military. 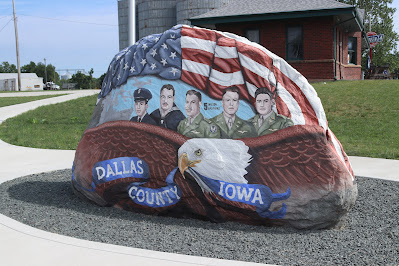 The final Central Iowa Freedom Rock is Dallas County's, found in the town of Minburn. The front side shows the portraits of the Wilson brothers from rural Dallas County near Minburn. All five brothers served during during WWII. The three brothers who all went in the Army were all lost in plane crashes. The two brothers that joined the Navy came back home after the war. I was very honored to visit the Dallas County Freedom Rock after reading about the Wilson Brothers in the book, "Leora's Letters" by Joy Neal Kidney. 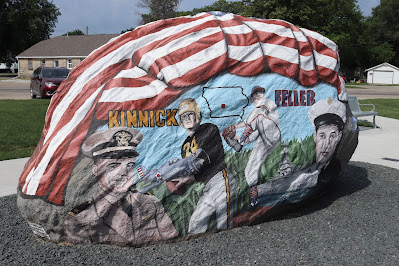 The backside of the Freedom Rock shares the stories of two legendary athletes from Dallas County who both served our country. Nile Kinnick Jr. was born in Adel and was a student and college football player at the University of Iowa. He won the 1939 Heisman Trophy and while attending law school he left to enlist in the Naval Air Reserve. On June 2, 1943 during a routine training flight Kinnick's plane developed an oil leak so serious that he could neither reach land or the aircraft carrier. He followed standard military procedures and executed an emergency landing in the water but died in the process.

Robert William Andrew Feller was born in Van Meter and was nicknamed "The Heater from Van Meter", "Bullet Bob" and "Rapid Robert". He was a pitcher who played 18 seasons in Major League Baseball for the Cleveland Indians from 1936 to 1941 and then from 1945 to 1956. He became the first professional athlete to enlist after hearing about the attacks on Pearl Harbor and served four years in the Navy during WWII as a Chief Petty Officer aboard the USS Alabama.

Visiting these Freedom Rock, along with others across the state is a great way to teach your children about the price of freedom, learn Iowa history and explore the state of Iowa. We love how each rock has a local connection and you can see the thought and time put into each design. It is also nice that most rocks are in towns off the beaten path and help you visit somewhere new. For a complete guide to all of the county Freedom Rock, check out this checklist. You can also check out our pictorial directory of all of the North Central Iowa Freedom Rocks and learn more about our home county, Franklin County's Freedom Rock on the blog.

Have you seen any of the Iowa Freedom Rocks? Which one do you recommend we road trip to next?