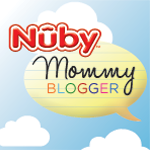 Today I'm excited to share my second review, as part of my five-part series for Nuby and their Mommy Blogger team, on Nuby's Clik-it No Spill Grip n' Sip.  Be sure to check out last week's review here. 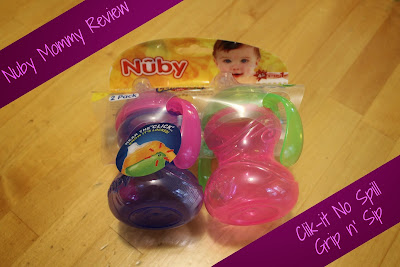 There comes a time in every infants life when they must make the switch from a bottle to a sippy cup.  I am here to tell you that you can do it as early as 4 months old with Nuby's Clik-it No Spill Grip n' Sip.  I haven't talked about this too much but I breastfeed my children.  I breastfed LP until he was 1 year old and I plan on doing the same with MP.  But there comes times when I am away from my kids and others need to feed them.  I figure why have my kids get attached to a bottle, so I started using a sippy cup with LP when he was 6 months old and have started using a sippy cup with MP at 4 months old.

I like Nuby's Clik-it No Spill Grip n' Sip cup for a couple reasons:

If you are interested in getting your own Nuby Clik-it No Spill Grip n' Sip, they can be found at Target.

To learn more about Nuby, get connected through their various channels of social media:

When did you switch your kid(s) from the bottle to a sippy cup?  Did you have problems making "the switch"?
Posted by Val at 11:00 PM