Climb Aboard History at The Durham Museum

*I received complimentary admission to facilitate this review.
All views and opinions shared are my own.*

From the first step into The Durham Museum you will marvel at the art deco architecture in the renovated Omaha Union Station.  From the terrazzo tile floors, to the gold-leaf decorations in the ceiling 60 feet up, you will be amazed at the work and dedication that went into preserving the history of this Nebraska landmark.

Our family had a great time exploring The Durham Museum on our Omaha Weekend family vacation.  My Farmer and I enjoyed learning about the history of the Union Station and the Omaha and Nebraska history exhibits on both floors of the Durham.  Here is a fun fact for you - The Omaha Union Station was used as a train station from 1931-1971 and then in 1973 the Union Pacific Railroad donated the building to the City of Omaha, which the city turned into a museum in 1975.  This building has now been used longer as a museum than operated as a train station.  And one extra side note - in 2016 the building was designated as a National Historic Landmark. 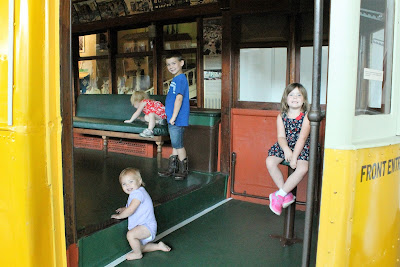 This wasn't just a great history museum for adults, our kids had a fun time too.  Downstairs in the Durham Museum they have many exhibits covering Omaha's history including displays on the area's American Indian history, the Lewis & Clark expedition, passenger trains that you can hop on board of (as seen above with our kids exploring one of the trains), and a replica of the Buffett Grocery Store, highlighting the career of Omaha native Warren Buffett. 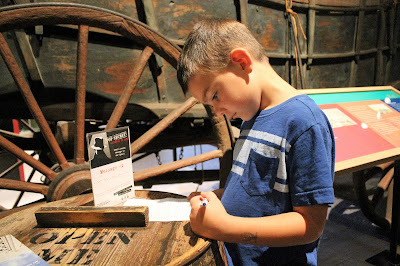 Our family also enjoyed the Top Secret: License to Spy exhibit currently on display at The Durham Museum.  They had one part that led you around the exhibits on the lower level through clues, where you unveiled a message by decoding Morse code.  The second part was a hands-on, highly interactive display where you received a "spy file" that gave you clues and a list of suspects to help you solve the mystery of whole stole the "world's most powerful computer chip."  We all enjoyed figuring out the clues and codes at the different exhibits. 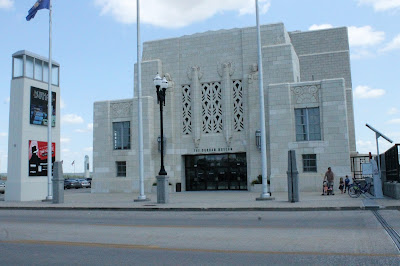 The Durham Museum is a must-visit stop on any Omaha Weekend vacation, especially if you are a history or train buff.  Plus, it is conveniently located near Old Market, Gene Leahy Mall and Heartland of America Park.  What is your favorite part of The Durham Museum?  Be sure to check out their website to learn more and remember to Comment for a Cause!

If you are planning an Omaha Weekend be sure to check out my other Omaha family vacation posts: