7 Tips for the Perfect Pie + Recipes

I am proud to call myself my family's resident pie-maker and I enjoy making pie for the holidays, celebrating birthdays, for the county fair and my church's ice cream social.  Making pies really is a simple process, but there is a lot of fear in doing it right.  So I'm here to share my 7 tips to help you make the perfect pie! 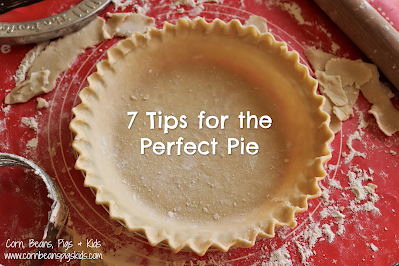 Make Your Own Crust

Pie crusts only need four ingredients: a fat, flour, salt and a liquid.  The fat adds flavor and creates the texture to the crust, the flour forms the structure and bulk of the crust, the liquid binds the dough, and the salt enhances the flavor.  Making your own homemade crust is not only simple, it is a fun experience and tradition to share with your family.  Anyone else have fond memories of eating the extra pie crust scraps baked with cinnamon sugar?

Pick a "Fat" for your Pie Crust

There are three main fats that pie crusts are made of: lard, shortening and butter.  A lard crust will make a flaky, blond crust that will remind you of the "way Grandma made it".  A shortening crust will also make a flaky and blond crust but doesn't have as much flavor compared to the lard.  A butter crust will have a golden color and will be rich in flavor, but will not be flaky.  I personally am a lard crust fan and purchase my lard from my local grocery store.  You can find it in the deli section or at the meat counter.  When not making pies, I store my lard in the freezer and then set it in the refrigerator the night before I want to make a pie.  I think lard will give you the flakiest crust that melts in your mouth.

Cut your fat and flour till it forms a pea-sized dough.  Then add your liquid (which I use cold water) one tablespoon at a time.  Don't over water your dough and use just enough water to bring the dough together that you can form it into a disk.  If you overwork the dough, you'll end up having a tough crust.

If there is one thing to remember while making your next pie, it needs to be to keep everything cool - your ingredients, your equipment, etc.  The refrigerator is your friend while making pie.  Your fat should be cold when cutting it into your flour mixture and you need to use a cold (even ice cold) liquid to bind the crust.  Once your dough is formed into a disk you need to refrigerate it for one hour before rolling it out.  This helps the dough rest, will make your dough easier to roll out later, and will help reduce shrinking during the baking process.  Then when you take it out of the refrigerator to roll it out, I let it sit for a few minutes before rolling it to my desired size and place it in the pie plate.  I will then put it back in the refrigerator while I make the filling of my pie.

Be Gentle with your Pie Crust

After you have your crust rolled out and are ready to put it in the pie plate, be gentle with it.  I like to roll cup my crust on my rolling pin and then roll it out onto the pie plate.  Lift up the crust lightly to make sure it sits in the pie plate and slightly press in into the pan.  Don't stretch or pull on the dough.  Then trim the extra pie crust and finish the top.  (I like to "pinch and crimp" the crust using my thumbs and index finger).

When to Take The Pie Out

When baking fruit pies, look for bubbles all over the pie.  That means it is done and ready to get out of the oven.  Custard pies look for the filling to be set around the edges but still slightly jiggly in the center.  The pie will finish and set after you take it out of the oven.  Then let the pie rest and cool before serving (which is the hardest part of the whole process). 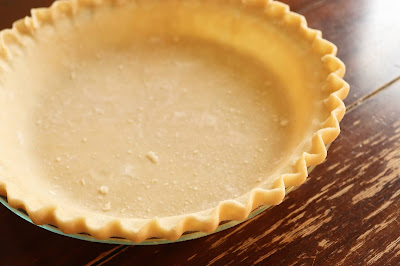 I hope with these tips you'll find the confidence to make your next pie from scratch and enjoy the traditions and love of serving homemade pie at your next celebration (or just because).  Here are some of my favorite pie recipes and hope you share some of your favorites below in the comment section!