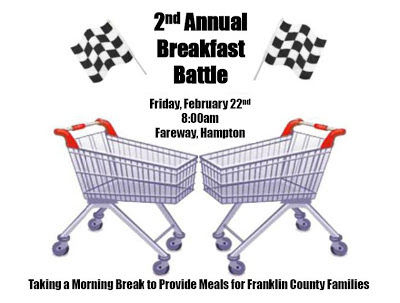 This event not only raised knowledge of National Food Check-Out Week, it also increased awareness of finding solutions to eating healthy on a stretched budget by having twelve teams race around the grocery store finding breakfast, dinner and supper for a family of four between $45 and $50.

The Breakfast Battle included two races; the first was a competition between nine businesses and the second was a battle between two Tall Corn FFA chapter teams and a Fareway team.  Teams consisted of three members each.  Team members drew menus for breakfast, dinner and supper Wednesday morning and then raced around the grocery store getting all their recipe ingredients, plus adding in optional food and drinks for a day’s worth of meals to get their cart total between $45 and $50.  Teams were timed from the moment they left the cart area till they reached the checkout lane.  Time bonuses were given to those that answered agriculture and Farm Bureau trivia questions correctly before the race and there was a time bonus for the team having the most votes on the Franklin County Farm Bureau’s Facebook “Fan Favorite” team poll.  Time penalties were given for every dollar over or under the $45 to $50 cart total range.  Following the race, twelve Franklin County families that utilize the Franklin County Food Pantry in Hampton and the Immanuel UCC Food Pantry in Latimer received the bags of groceries, which included both perishable and non-perishable items.  Donations were also collected for both food pantries.

“We feel like everyone was a winner!” said Brook Boehmler, Executive Director of the Greater Franklin County Chamber of Commerce, who had a team in the business race.  “All nine teams (in the business race) are Chamber members and the food collected in the battle went to families who need it.  All the teams had a good time, and we really look forward to being a part of it next year.”

I had so much fun being a part of this event.  Did you celebrate National Food Check-Out Week?  If so, what did you do in your community?
Posted by Val at 11:07 AM